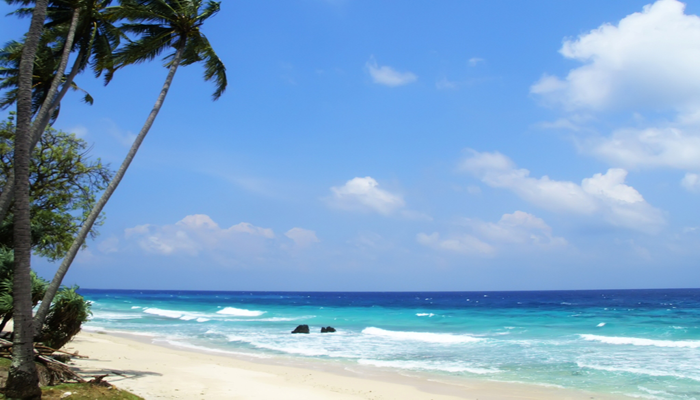 The beauty of Indonesia is well known to foreign countries. From Sabang to Merauke lies the natural beauty that other countries can envy.

We will not be bored if we surround Indonesia, each region has a variety of beauties. Likewise if you visit the western tip of Indonesia. Precisely on the island of Sumatra.

On the east coast of Pulau Weh, Sabang City, there is a beach that has its own charm. The beach is beautiful and beautiful, decorated with white sand that stretches out neatly. The faint waves sounded screaming.

Really soothes the souls who come to him. Pantai Sumur Tiga that is the name of the beach.
Sumur Tiga Beach has extraordinary beauty, there are rippling waves so it’s perfect to test your adrenaline on the ocean.

Don’t ask about the beauty of the scenery anymore, a traveler only needs to bring a DSLR camera or HP camera, and enjoy for yourself the charm of the beauty that spoils the eyes.

The naming of a location is closely related to events, figures, or other objects that are considered sacred, legendary, or because of a form of respect. Likewise with the name Sumur Tiga.

Once upon a time around the beach there were three wells which became springs for local residents. It is very extraordinary, because the water produced is not salt water but fresh water.

However, unfortunately this well is no longer used by local residents, but is a historical witness to its proud past.

The distance from Sabang City to the location of the Sumur Tiga Beach tourist attraction is approximately 2.4 kilometers, and the best route to the location is via Cik Ditiro and Jalan Agus Salim.

The close distance from Sabang City to Tiga Sumur only takes approximately 15 minutes. From Sabang City, a traveler only has to go to Sukajaya District, then head to Le Mulee Village.

Sumur Tiga Beach is often a national and foreign tourist destination, so the facilities in the beach area are sufficient to meet the needs of tourists, including lodging.

The price of lodging is also determined by the facilities available at the hotel or inn. The cheapest price for an inn is Rp. 100,000, of course, with makeshift facilities.

The price of admission to the location of Sumur Tiga Beach is free, free of charge for tourists who come to visit.

In ancient times the busiest transportation routes were sea routes, including access between countries. The beauty of Sumur Tiga Beach has captivated the hearts of other nations, because its aposition was facing the busiest trade route at that time, namely the Strait of Malacca.

Now Sumur Tiga Beach has transitioned into a tourist attraction with historical value to be proud of. Therefore, be a wise visitor by not destroying the existing natural conditions.